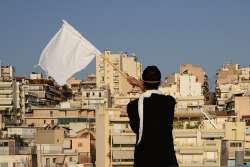 Semiotics of the Protest

Semiotics of the Protest performed video focuses on the action of street protest, a vital tool by means of which people reclaim public space and activate agora as political terrain. The video relies on an in-situ performance for which I invited the performer/choreographer Grigoris Gaitanaros to rehearse public gestures of resistance against oppression. The performance took place on the terrace of an apartment building in Retsina, a formerly industrial neighbourhood in Piraeus, on August 21, 2014, from 7:00 to 8:30 a.m.