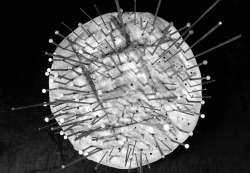 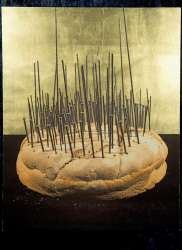 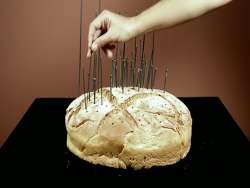 Biography of the Bread

Biography of the Bread creates a ritualistic space for exposing iconic obsession with the bread imposed by its fundamentality as the necessity of living, and the political games of lacking or being granted the right to it. In this context, in September 2014, I realized a performance in which bread has been visualized as the battlefield of exercising power and of contradicting political, cultural and/or religious ideologies. Out of this performance I created a fabricated photographic image and a performed video, which I then combined to formulate the video installation.
The audio of the video consists of sounds of political street protests in combination with byzantine ecclesiastic hymns.
The protest sounds were collected from various electronic sources during the years of 2008-2015. These sounds are resonances of disobedience mingling sounds of spraying chemical gases and attacking with rhythmic protest slogans where the word ‘bread’ is repeated. For example, “Bread and Dignity”, Egypt revolution, 2011, “Bread-Education-Freedom”, Greek protests, 1973 and 2010.