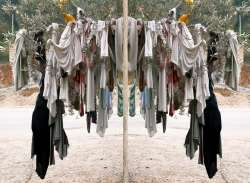 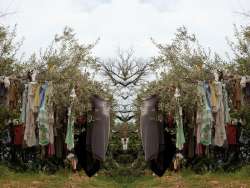 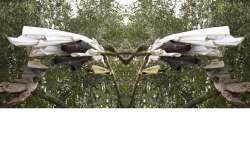 The photographic series Tzatzala represents the collective act of being exposed to vanity. It describes a performative praxis of resistance in time, illness and death.

To begin with, a few kilometres away from the city of Mytilene, the capital of Lesvos, there was a grove of wild olive trees on the branches of which for hundreds of years, since 1800, people used to hang pieces of clothing, the so-called ‘tzatzala’. They would traditionally do so to express a wish for healing from any kind of illness, injury and/or other traumatic human experience. The pieces of clothing were exposed to public view and as years went by, they increased to shape an outlandish assemblage of layers of timeworn and new multi-coloured clothing hanging together on the branches of the olive trees. In 2009, the local authorities had decided to cut down the trees with the ‘tzatzala’ as part of the developing works for the widening of the Mytilene highway. So, I travelled to the island and I managed to document them just a few days before their destruction.

In 2012, I reworked on the specific images in order to produce new knowledge based on the transformation of the perpetuity of the photographic evidence. Employing the dynamics of digital imaging, I explore the ephemerality suggested by the postproduction alterations. As the digital process requires several modifications through the editing of the initial observing phenomenon, it interrupts the fidelity of the visual results of the ritual and makes space for new interpretations and manifestations of cultural memory and practice. Subsequently, the digital procedure encodes the fixed photographic information and gives the possibility of various readings of the ritual through visual symbolism, simulations and fictitious repetitions.